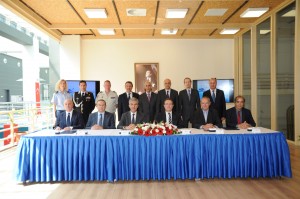 EUROSAM, together with ASELSAN and ROKETSAN, lay the foundation of strategic cooperation in air and missile defence

The heads of Eurosam, Aselsan and Roketsan – respectively Michel Vigneras, Faik Eken and Selçuk Yaşar – have signed on the 14th of July in Ankara a Heads of Agreement (HoA) under the aegis of the Turkish Undersecretariat for Defence Industries (SSM) to launch in-depth co-operation in the field of air and missile defence.

The HoA sets the work sharing agreements for a definition study with the SSM on a long-range air and missile defence system to be launched in the coming months.

The future Turkish air and missile system will be based on the technologies and experience that Eurosam has built in ground and naval systems using the Aster missile over 25 years and EUR11 billion of collective investment. These systems have been delivered to the current home nations of France and Italy, many export nations, and are able to defeat the most challenging of air threats, whether air breathing or ballistic. The future programme will be managed in synergy with future evolutions of the Eurosam systems in France and Italy.

At the occasion of the HoA signature, Eurosam CEO Michel Vigneras said: “The Italian Army has deployed two Eurosam-built SAMP/T firing units since June 2016 as part of NATO’s contribution to the defence of Turkey and its people against potential missile threats from beyond NATO’s southeastern flank. Today’s agreement is a clear demonstration of the willingness and readiness of our 3 companies to build further on the strong defence co-operation commitments already in place and to work together as equal partners, towards a common goal and sharing full and entire responsibility vis-à-vis the Turkish authorities. I am confident that today, we have laid the foundation of a long term co-operation between Eurosam and the Turkish defence industry.” 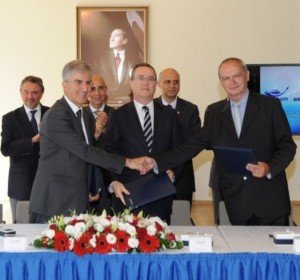 From left to right, Basat OZTURK, Deputy Undersecretary of Turkish Ministry of Defence; Selcuk YASAR , President and CEO of Roketsan; Luigi MATTIOLO, Italian ambassador to Turkey; Dr Faik EKEN, President and CEO of Aselsan; Mustafa ŞEKER, Deputy Undersecretary of SSM; Michel VIGNERAS, CEO of Eurosam congratulate after the signature of the Heads of Agreement for the definition phase of the long range air and missile defence system on July 14th in Ankara, in the presence of the French ambassador to Turkey, Charles FRIES (not in the picture).

eurosam was established in June 1989 as a joint venture of MBDA and THALES. eurosam is the industrial prime contractor and system design authority for the development, production, marketing and sales of a range of medium and long range naval and ground-launched air-defence missile systems also known as Future Surface-to-Air Family of missile systems.These systems were developed under contract from the French and Italian Governments, who in the late 1980s had come to similar conclusions as to their air-defence operational requirements. These called for naval and ground-launched missiles capable of defeating threats as diverse as high-speed tactical missiles (supersonic sea skimmers, air-launched, anti-radiation, cruise, TBM and other types) and highly-manoeuvering aircraft, in a saturation attack scenario. The key capability of these systems is their capability of, simultaneously, engaging multiple targets, in any type combination, over 360 degrees.

ROKETSAN, was founded in 1988 by the resolution of the Turkish Defense Industries Executive Committee for the purpose of possessing a leading institution in the country for designing, developing and manufacturing rockets and missiles. Nowadays, ROKETSAN has become the proud manufacturer of world class products such as the SOM Stand Off Missile, the UMTAS Long Range Anti Tank Missile System, the OMTAS Medium Range and the CIRIT 2’75” diameter Laser Guided Missile.