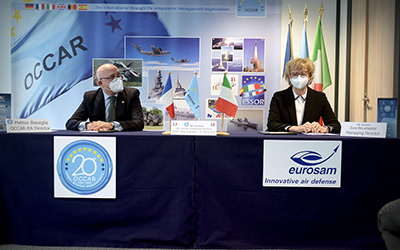 The contract for the development of the SAMP / T NG (New Generation) for France and Italy has been signed today at OCCAR premises in France (Paris area) in the presence of the French Air and Space Force staff, the Italian Army staff, the OCCAR Director and National representatives of the French Armament General Directorate (DGA) and of the Italian Armament Directorate (SGD). OCCAR has awarded the contract, by delegation of DGA and SGD, to the Franco-Italian consortium eurosam ; backed by its two shareholders MBDA and Thales.

This contract complements the first contract signed in 2016 with the objective to enhance the SAMP / T systems operational in the French Air and Space Force and the Italian Army.

With this contract, eurosam is able to deliver an important enhancement of the SAMP / T system based on:

The SAMP / T NG is designed to achieve all Ground-Based Air Defense missions with enhanced key capabilities. It is a long-range surface-to-air missile defense system able to:

With these enhanced features, SAMP / T NG will provide to France, Italy and any other customer, the capability to guarantee their airspace sovereignty, to protect their territory and population and to protect their troops in operations.

eurosam was established in June 1989 as a joint venture of MBDA and Thales, European leaders in missiles, systems and radars, endowing it with major expertise in terms of solutions for air defense. eurosam is the industrial prime contractor and system design authority for the development, production, marketing, sales and in service support of a range of medium and long range naval and ground-launched air-defense missile systems also known as Future Surface-to-Air Family of ASTER missile systems. These systems were developed under contract from the French and Italian Governments, who in the late 1980s had come to similar conclusions as to their air-defense operational requirements. This cooperation, enlarged to the UK in 1996, has experienced export successes, both in naval and land configurations.